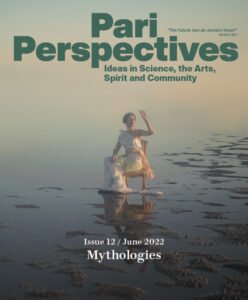 Welcome to Issue 12 of Pari Perspectives which explores the topic of Mythologies.

Today the word ‘myth’ is largely derogatory, used as it is to designate a narrative which is untrue but which has a hold at some primitive level on those considered to be insufficiently advanced in knowledge, be they ‘primitive peoples’ or our own peers and contemporaries. Whatever the attitude to myth, surely they—myths, either personal or collective—must be what we all live by, though largely unconsciously, as otherwise what is it that gives meaning to our lives or binds us together in communities of one kind or another?

This issue opens with a very fine essay from Jungian, Beverley Zabriskie: ‘Orpheus and Eurydice: A Creative Agony.’ Beverley’s contribution is a profound and detailed examination of the truth and significance of myths and what the Orpheus and Eurydice myth can teach us about ‘the range of experience as one both engages reality and reaches towards meaning.’

From non-European cultures we have recounts by present day First Nations people of encounters with ‘mythic reality’ given by John Briggs, Tiokasin Ghosthorse, and Robert Toth in ‘The “Wholeself” in Mythic Reality: Intuition, Imagination, Shape-shifting & Mystery.’ This mythic reality is equated with David Bohm’s holoflux. And Urmi Chanda introduces us to ‘Indian Mythology and Music: Mythological References of Musical Instruments and Vocal Traditions in Ancient Indian Texts.’

According to Mark Vernon in ‘Dante, Myth, and the Path to God,’ Dante’s The Divine Comedy can be called a myth and is an account of a real experience through which Dante had ‘a direct taste of the unity of all creation,’ an experience which required the deployment of his poetic genius to convey its fullness. While Mark Vernon focuses on eros, F. David Peat, looks at mythos and logos as ‘Parallel Lines.’ Bronwen Rees in ‘Seeding the Old in the New:
The Invisible, Living Threads of the Traditions’ calls us ‘to reconnect with the myths and legends of the past…to recognise that they still live amongst us.’

And finally, to the More Perspectives section which takes a lighthearted look at Modern Mythologies from Flat Earth theory to Paul McCartney’s demise in the Sixties, to the belief that CERN is working to ‘open new portals’ in order to summon God, to the Stanford psychologist who is largely responsible for the mass release of psychiatric patients in the Seventies—based on a fraudulent piece of research. He’s worth quoting: ‘Whenever the ratio of what is known to what needs to be known approaches zero, we tend to invent “knowledge” and assume that we understand more than we actually do. We seem unable to acknowledge that we simply don’t know.’ ‘And,’ he could have added, ‘therefore invent myths.’

The journal is available to everyone who has become a Friend of the Pari Center: www.paricenter.com/membership