The Quantum Multiverse: Everett and Beyond

Everett provided a way of reading the quantum state, as it evolves in a measurement process, as a multiplicity of parallel processes (branches), where the rules for the latter are classical. He was also able to show that the statistics encoded in ‘most’ of those processes agrees with the Born rule, in the sense that the amplitudes of branches not of this kind become vanishingly small (in comparison to those of this kind) as the number of trials becomes large.

Simon Saunders’ talk is in three parts: the first is on how this way of reading the quantum state, divested of any probability interpretation, extends not just to rules for sequences of recordings and storage in memory (experimental protocols), but rules for values of certain kinds of dynamical variables (quasi-classical equations)—whether or not experiments are performed. These rules may be more or less well-defined—the patterns at issue are ‘emergent.’ In this way Everett’s approach becomes a general method for exploring low energy quantum mechanics. It amounts to the method of finding quasi-classical domains, in Gell-Mann and Hartle’s sense, with possible generalisations away from the classical.

The second part of the talk is on the interpretation of probability on this approach. Saunders shall argue that branching is the locus of objective chance or ‘propensity,’ with squared amplitudes of branches as chances. As such, probability is also emergent. So construed, he shall argue that all or almost all the characteristics of our pre-theoretic understanding of probability in the physical world can be recovered, although the notion of ‘uncertainty’ is changed.

The third part is in contrast somewhat speculative. It is on the relation between the quantum histories formalism and Leibniz’s monadology, and the implications, if any, for the mind-body problem. 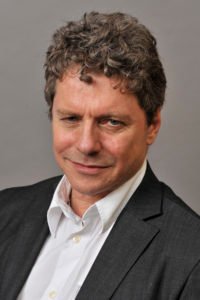 Simon Saunders studied at Oxford, Cambridge, and London, returning to Oxford. In the period 1990-96 he was an assistant, and then associate professor of philosophy at Harvard, returning to Oxford to take up a fellowship at Linacre, and later Merton College. He is professor of philosophy of physics at the university, and tutorial fellow at Merton; he was president of the British society for philosophy of science 2017-2019.  He works on quantum theory, symmetries, and statistical mechanics, with interests in history of physics and history of early modern and analytic philosophy. He is the lead editor of Many Worlds? Everett, quantum theory, and reality (OUP 2010).