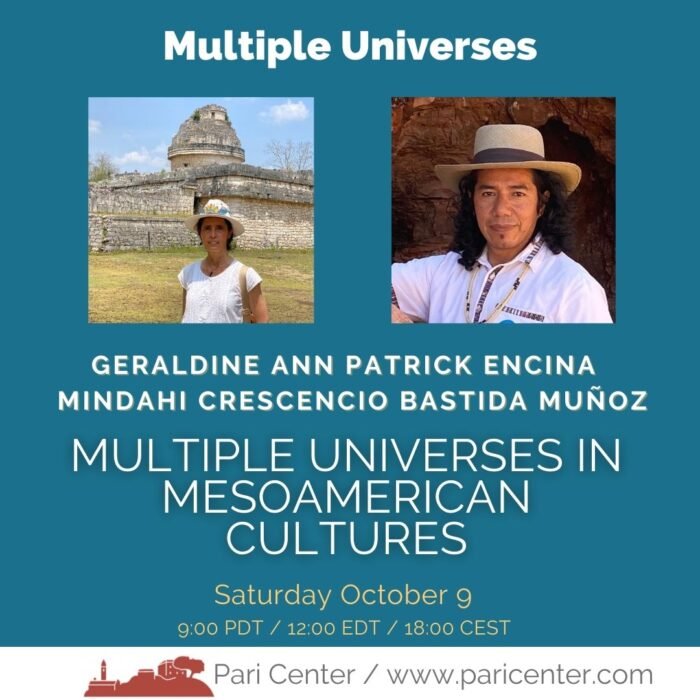 Drs Mindahi Bastida and Geraldine Patrick will share about the cosmovision of Mesoamerican cultures, where multiple simultaneous worlds are understood to exist. They will draw from different representations of such worlds and will also share personal experiences where they have had a glimpse into such alternate dimensions. 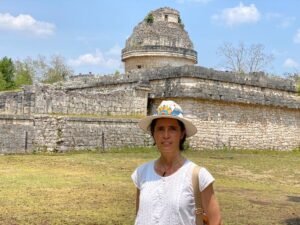 Geraldine Ann Patrick Encina (Mapuche Descent) has been a founding member of the Biocultural Heritage Network of Mexico since 2008, is founder and executive director of Earth Timekeepers since 2016, member of several pre-Columbian societies since 2015 and member of the Inter-American Society of Cultural Astronomy since 2013.

She has been a professor at the Intercultural University of the State of Mexico for courses on Ethnoecology and Biocultural Ethics (2007-2010), and at Universidad Autónoma Metropolitana Unidad Lerma (2012-2015) for Interdisciplinary Studies, Complex Systems and Mesoamerican Calendars.

Her research focuses on the ancestral and current ways of conceiving time and natural cycles in Mesoamerica, especially among the Maya, Otomian and Mexica cultures, and since 2016 she has started study groups in four communities in Mexico and Guatemala with teachers, university students and organized farmers and women interested in revitalizing their culture and traditional ways of living with the land. Among her publications are “Biocultural Sacred Sites in Mexico” in the book Indigeneity and the Sacred, article Long Count in Function of the Haab and its Venus-Moon Relation. Application in Chichén Itzá and article Pyramid of the Feathered Serpent. Its Relation to Evening Venus, Rains, and the closing of 13 Bak’tun. 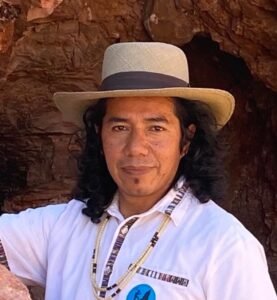 Mindahi Crescencio Bastida Muñoz (Otomi-Toltec) is the Director of the Original Nations Program at The Fountain and a member of the Mother Earth Delegation. He is an executive member of the Alliance Guardians of Mother Earth and a spokesperson of the recently created Grand Council of the Eagle and the Condor. He is also the General Coordinator of the Otomi Regional Council of the High Lerma River Basin, Mexico, that promotes the rights of nature and Mother Earth as well as the rights to self- determination of original nations.

Mindahi has served as a delegate to various commissions and summits on indigenous rights and sustainability, including the 1992 Earth Summit and the World Summit on Sustainable Development (WSSD, 2002). He was director of the Original Caretakers Program at the Center for Earth Ethics at Union Theological Seminary in New York City between 2015 and 2020 and has been invited to partake in several advisory councils.

He has written on the relation between the state and Indigenous Peoples, intercultural education, collective intellectual property rights and associated traditional knowledge, biocultural sacred sites, and other topics.