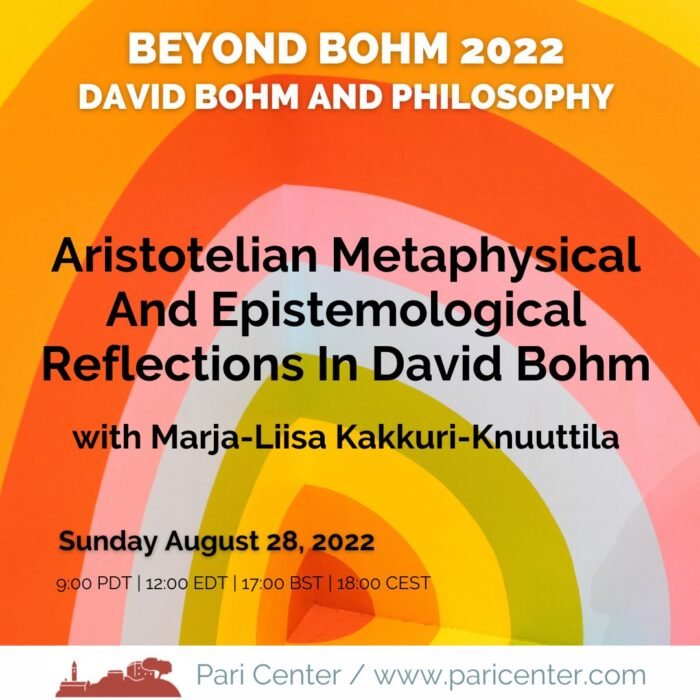 It is well known that David Bohm’s causal interpretation of quantum mechanics and its development with Basil Hiley offers a realist ontological view of particles, waves, quantum potential, and active information (Bohm 1952, 1985, 1988, 1989, 1990; Bohm and Hiley 1975, 1987, 1993). However, the other epistemological and metaphysical underpinnings of the causal interpretation are still in need of detailed scrutiny. This presentation will explore two other realist components in Bohm’s thinking which bear some resemblance to Aristotle’s philosophy. The familiar argument from laws to the existence of the quantum objects and the reality of their properties will be only briefly mentioned. The focus will be on Bohm’s peculiar methodology of intuitive intelligibility (II), and his argument for the two metaphysical properties of causal powers, which bear clear similarities to Aristotle’s epistemology and metaphysics.

The first part of the talk presents the (II) methodology. It is developed and applied it to demonstrate the reality of the strange properties of quantum causation, such as, non-locality, self-activity, and holism, by showing that they are similar to phenomena in our daily life and thus familiar in common experience (Bohm and Hiley 1987, 1993). In this manner Bohm and Hiley respond to the challenges of physicists to develop an intuitively comprehensible interpretation of quantum mechanics (see Pylkkänen 2017). The argument here will be that the (II) methodology has a systematic role in the causal interpretation.

The second part of the presentation discusses the metaphysical properties of active information as a causal factor. A closer look at how Bohm speaks about active information as a causal factor in connection with the radio, for instance, reveals the power concept of causation (Meincke 2020). This forms a clear contrast to the empiricist view of causation as consisting merely of regularities between concomitant events. In talking about the functioning of the radio, for instance, one can identify two traditional metaphysical properties of causal powers (Bohm 1989, Bohm and Hiley 1987, 1993). These are the distinction between actuality and potentiality and the idea of full power as constituting of a pair of partner powers, one active and the other a receiver of the activity of the other (Aristotle Metaphysics book IX chs. 1-7).

The claim that the causal interpretation involves classical elements of power metaphysics, may sound somewhat puzzling, since Bohm and Hiley do not explicitly speak about powers and their metaphysical properties. This can be explained in a natural way, however, by referring to Aristotle’s argument against Megaric philosophers for the necessity of potentialities (Metaphysics book IX ch. 3). My claim is that while Aristotle shows that the reality of potentialities is a necessary precondition of human action and causal relations in general, the epistemological approach of the causal interpretation is quite similar. Power metaphysics is adopted as a chief element underlying our common experience.

Marja-Liisa Kakkuri-Kuuttila has been professor of Philosophy of Management at the Aalto University Business School. She has taught courses in Philosophy of the Social Sciences and other philosophy courses for business students. She has worked on the dialogue method and philosophy of science in Aristotle and contemporary notions of dialogue. This interest has inspired her recently to investigate methodology and ontology in David Bohm’s and Basil Hiley’s causal interpretation of quantum mechanics.