Discover our current events, find out more and sign up

Don't forget: besides our events in Pari, you can use this idyllic space to host your own gathering of minds and hearts. We have experience helping you organize successful conferences and seminars, retreats (yoga, book clubs, poetry, philosophy and more), plus corporate get-togethers such executive retreats, unforgettable teambuilding events, and parties.

To set up your event in Pari, contact us. 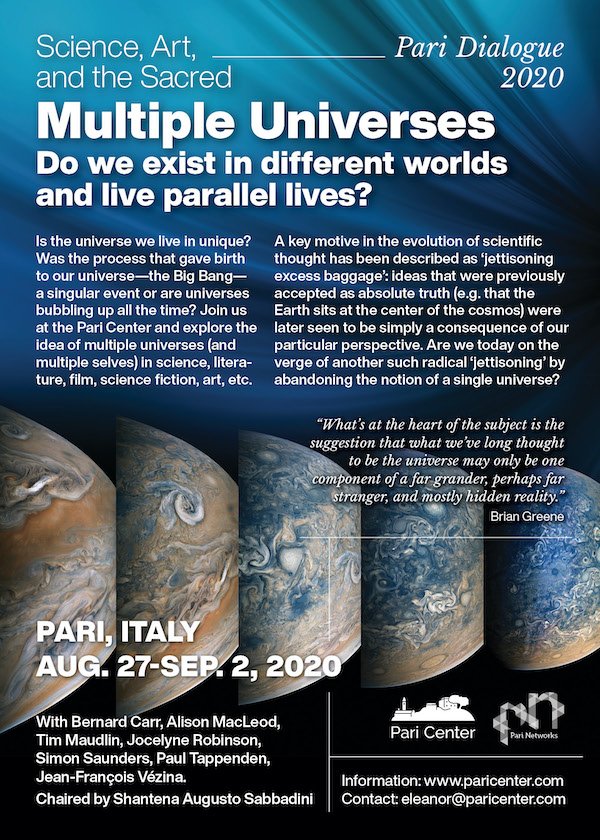 Is the universe we live in unique? What lies beyond the boundaries of the universe we see? Was the process that gave birth to our universe – the Big Bang –a singular event or are universes bubbling up all the time? Do we exist in different worlds and live parallel lives?

Such notions would have seemed outrageous a few decades ago: surprisingly, as evidence begins to converge from different directions, they are close to becoming scientific orthodoxy.

The Nobel laureate Murray Gell-Mann described a key motive in the evolution of scientific thought as “jettisoning excess baggage”. Ideas that were previously accepted as absolute truth (e.g. the idea that the Earth sits at the center of the cosmos) were later seen to be relative and simply a consequence of our particular perspective. Are we today on the edge of another such radical enlargement of our perspective by abandoning the notion of a single universe?

In this Pari Dialogue we will explore the idea of multiple universes (and multiple selves) in science, literature, film, science fiction, etc.

This will be an informal meeting with presentations by experts followed by roundtable discussions.

The cost of the event is 1400 euros. The event fee includes 6 night stay in private accommodation and all meals. It also includes activities, materials and teaching sessions. The event starts on Thursday August 27 at 19:00 with dinner and ends on Wednesday September 2 after lunch.

The Multiverse: Linking Matter and Mind and Stretching the Limits of Science
Bernard Carr

Quantum Mechanics, the Actual World, and Other Possibilities
Tim Maudlin
Ad/Dressing the Universe
Jocelyne Robinson
The Quantum Multiverse: Everett and Beyond
Simon Saunders
Dendritic Quantum Mechanics
Paul Tappenden
May The Force Be Among Us: Exploring our MultiVerse with the help of Star Wars and other movies
Jean-François Vezina
Spread the love
+ Google Calendar+ iCal Export