I will discuss the implications of the concept of nonlocality and hidden variables to our understanding of life in the real world. Making a concrete analogy between quantum systems and humane societies reveals a way of being-in-the-world that is not only more Beautiful and True but also Good. I will argue that the revolutionary discoveries of the quantum revolution inform and inspire current revolutions in ecology, agriculture, and politics. 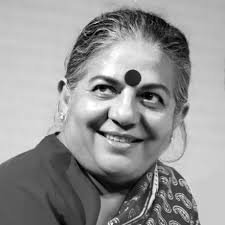 Dr Vandana Shiva is an Indian scholar, activist, and author. A food sovereignty advocate, environmentalist, and ecofeminist, Shiva holds a PhD in physics and has written more than 20 books, including Making Peace with the Earth, Staying Alive, Monocultures of the Mind, Democratizing Biology, Soil Not Oil, and Stolen Harvest. Based in Delhi, she is referred to as “Gandhi of grain” for her activism associated with the anti-GMO movement. Shiva is one of the leaders and board members of the International Forum on Globalization, and a figure of the anti-globalization movement. She has worked as a consultant for the Indian government and abroad, and in NGOs such as the International Forum on Globalization, Women’s Environment & Development Organization and Third World Network. She is a co-founder of the gender unit of the International Centre for Integrated Mountain Development, and of the Women’s Environment & Development Organization. Shiva has received numerous international honors, such as the John Lennon-Yoko Ono Grant for Peace (2008), Sydney’s Peace Prize (2010), Calgary’s Peace Prize (2011), and the Right Livelihood Award (1993), which is regarded as the “alternative Nobel Prize”.