Infinite Potential: A Filmmaker’s Journey into the World of David Bohm

Infinite Potential: A Filmmaker's Journey into the World of David Bohm

Having just completed a film on David Bohm’s life, his incredible work in physics, philosophy and the nature of consciousness, the question that Paul asked himself was, how come I never before heard about this extraordinary man and his work?

He was the man Einstein called his ‘spiritual son’ and the Dalai Lama his ‘science guru,’ so why is it that the world hardly knows his name?

Paul Howard’s film is an attempt to answer that question, to shine a light into the world of Bohm and how making the film changed his life.

It’s a film he believes has the potential to change the world. 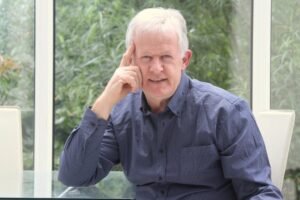 A Producer, Director, Executive Producer of International repute with an enviable track record in documentary, television series and more recently in feature film production.He has just completed work on the documentary titled Infinite Potential—The Life and Ideas of David Bohm for release in 2020.

Paul has worked across most disciplines in the film/television industry over the past 30 years in Ireland and overseas as a director, producer, writer, covering genres such as biography, natural history, wildlife. He has directed many critically acclaimed documentaries. He has worked for RTE (Ireland’s Public Service Broadcaster), Imagine Limited (Independent Film Company), Nine Network (Sydney, Australia), Nomad Films International (Melbourne, Australia).

Some recent successes include 21st Century Railway, a modern history of railways; Waiting for Houlihan, an arts documentary nominated for an IFTA award; Marsh to the Skies, the secret Irish/American alliance that gave American access to Shannon Airport during the ‘Cold War’; The Irish in Hollywood, a documentary ‘special’ on the cultural impact that the Irish have had on the famous Film Town; Bloomsday, a documentary celebrating James Joyce’s Ulysses, broadcast internationally.

In Australia, Paul completed Triumph of the Nomads, a history of Australia prior to the arrival of European white settlement; and The Pintubi, a series about the last remaining tribe of Aborigines who roamed the outback of Australia up until 1935. Also, Breakthroughs, a series on the latest developments in science and medicine.