Chris Dewdney will review a selection of the animations that he originated during the period from 1979, when the Two-Slit calculations were first published, up to the more recent field-matter interaction examples. The animations will be shown (many in the updated form seen in the documentary Infinite Potential) during his talk and he will explain in a non-technical way, how they were produced and exactly what they show. For each animation, the implications for our understanding of quantum mechanics and the nature of reality will be drawn out. In particular, it will be argued that the fundamental nonlocality of quantum mechanics demands that we must transcend our common-sense perception that events are determined solely by processes taking place within ordinary space and time. The true arena in which Schödinger’s quantum mechanics plays out is ‘configuration space’ and these will illustrate, using the animations, how Bohm’s trajectories within this space give rise to nonlocal connections in our everyday space and to the wholeness that is seen in complex quantum systems (everything is a complex quantum system). Finally, there will be discussion on the nature of quantum fields in David Bohm’s quantum field theory and the interaction between quantum fields and quantum matter, hence revealing the nature of the photon.

Each of the animations will be shown and discussed in turn, allowing plenty of time for questions and answers after each. The animations considered will be: 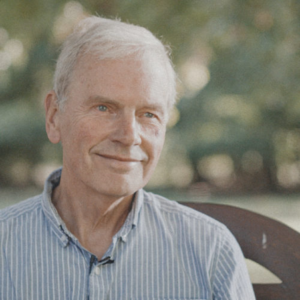 Chris Dewdney, PhD. Reader in Theoretical Physics at the University of Portsmouth.

Chris then obtained funding from the British Science Research Council to work towards a PhD in David Bohm’s group in the Physics Department at Birkbeck College in London. There, Chris started to read Bohm’s papers on the notion of order in physics, attended Bohm’s undergraduate lectures on quantum theory and the frequent postgraduate seminars. Initially, Chris was the only full-time PhD student at that time working in Bohm’s group. At Birkbeck, students had to find their own PhD topic, the main thrust of the research was around formulating a mathematical description of Bohm’s notion of the holomovement and the processes of ‘becoming.’ Bohm’s 1952 hidden-variable theory was not discussed at the time and it was pure serendipity (browsing in the bookshop) that lead Chris to formulate his own PhD study demonstrating in detail how Bohm’s 1952 theory accounted for all of the ‘paradoxical’ features of quantum theory, starting with the double-slit experiment. Whilst at Birkbeck, Chris also produced the first computer-generated motion picture animations of quantum tunnelling.

On completion of his PhD in 1983, Chris was awarded a Royal Society Fellowship which he held in Jean-Pierre Vigier’s group at the Insitut Henri Poincare in Paris. During the fellowship Chris extended the detailed de Broglie-Bohm theory calculations to include neutron interferometry and the processes of spin measurement and spin superposition.

In 1986, Chris took up a permanent teaching and research position at The University of Portsmouth in the UK, becoming a Reader in Theoretical Physics in 1992. At Portsmouth he extended his work in de Broglie-Bohm theory to give a detailed, de Broglie-Bohm account of the nonlocal processes evident, for example, in the Einstein, Podolsky and Rosen experiment. At Portsmouth, working with George Horton, and his own students, Chris also developed detailed de Broglie-Bohm accounts of quantum chaos, the motion of quantum fields and the quantized exchange of energy between matter and radiation.