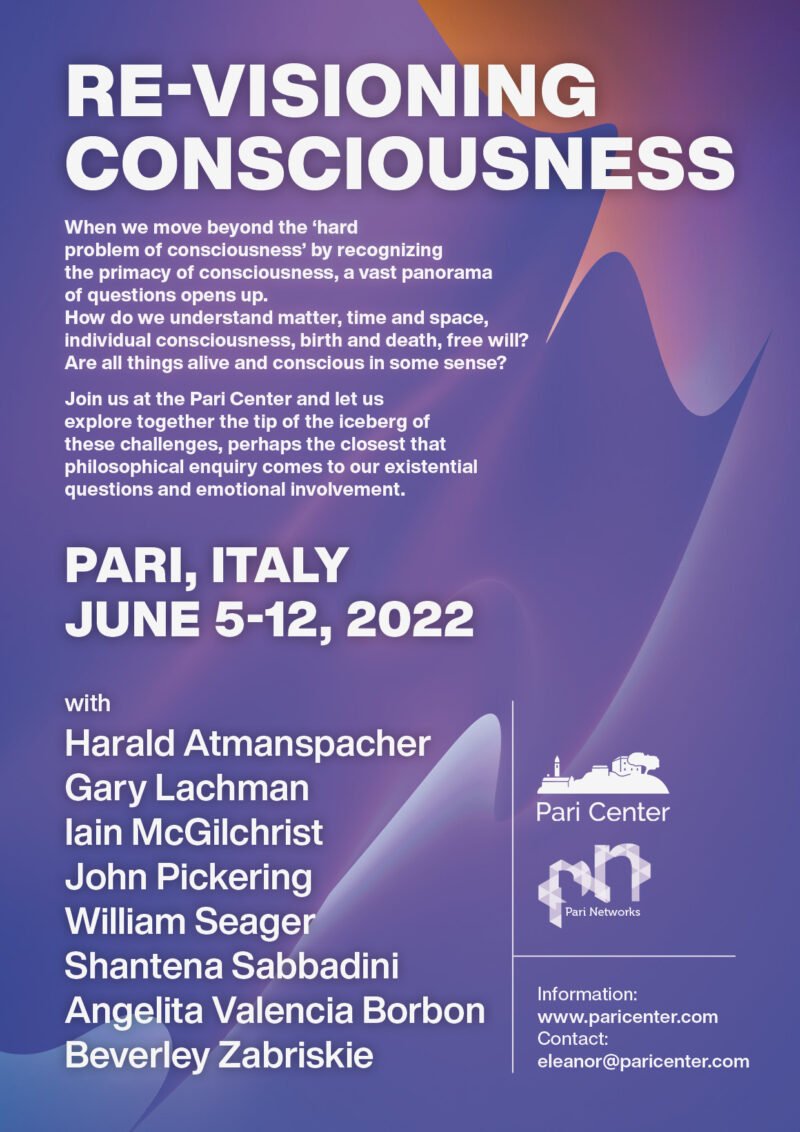 Price: 1700.00 euros (This fee includes 7-night stay in private accommodation, all meals and sessions and workshops.)

When we move beyond the ‘hard problem of consciousness’ by recognizing the primacy of consciousness, a vast panorama of questions opens up. How do we understand matter, time and space, individual consciousness, birth and death, free will? Are all things alive and conscious in some sense?

Join us at the Pari Center and let us explore together the tip of the iceberg of these challenges, perhaps the closest that philosophical enquiry comes to our existential questions and emotional involvement.

We are delighted and honoured to announce that Federico Faggin, inventor of the microprocessor and delver into the science of consciousness, will be with us in Pari for this event. We will also be hosting Roberto Miller the filmmaker of the documentary The Four Lives of Federico Faggin.  Following a screening of the film, there will be a panel discussion with Federico and other presenters and then an open discussion and Q&A with all participants of ‘Re-visioning Consciousness.’

This will be an informal meeting with presentations by experts followed by roundtable discussions. The cost of the event is 1700.00 euros. The event fee includes a 7-night stay in private accommodation and all meals. It also includes activities, materials, sessions and workshops. The event starts on Sunday June 5 at 19:00 with a welcome dinner and ends on Sunday June 12 after lunch.

Participating in an event at the Pari Center means not only meeting with scholars and experts but living for a week in a medieval village, mingling with the tiny local population, eating local dishes and drinking local wines, appreciating the beauty of the surrounding countryside, and participating in a very gentle way of life far from the frenzy of work and city living. David Peat compared Pari to an alchemical vessel—a place where transformation can come about—as well as an opportunity to pause for a moment and re-assess one’s life. It’s a unique opportunity open to everyone.

When we move beyond the ‘hard problem of consciousness’ by abandoning the tacit premises of materialism and physicalism, a vast panorama of questions opens up.

Is consciousness indeed, as Schrödinger suggests above, the primal experience, the elementary primary fact all our philosophy and all our science are built upon?

Does consciousness arise in the world, according to the physicalist view (e.g., when a sufficiently complex nervous system evolves), or does the world arise in consciousness? And, if the latter is the case, how does that happen? If the world is a dream arising in consciousness, why does it arise? And why is the dream structured as it is, why is it a cosmos, not a chaos?

Matter and spacetime appear to have their own order, their own laws that govern our experience. Are those laws intrinsic to consciousness? Are they in turn a creation of consciousness?

Another possible approach is that of pantheism. In this perspective the world exists and consciousness exists, they are both primary. But the world is infused with consciousness, everything is conscious to some degree, from the most elementary (say, an elementary particle) to the cosmic scale of the universe itself.

Or you might say matter and consciousness are just two sides of one coin. Dual aspect monism suggests that mind and matter are the dual manifestation of one substance, which is perceived from the inside (in the first person) as consciousness, from the outside (in the third person) as things.

In Re-Visioning Consciousness, we will explore together the tip of the iceberg of these profound questions, perhaps the closest philosophical enquiry comes to our existential and emotional involvement.

Does “Consciousness” Exist? with Harald Atmanspacher

Awakening Conciencia and The Path With Heart with Angelita Valencia Borbon

Dreaming Ahead of Time with Gary Lachman

Why Re-vision Consciousness? with John Pickering

The Problem of Consciousness in Philosophy, Or What’s All the Fuss About?  with William Seager

Inside Out and Outside In with Beverley Zabriskie

For additional information about the event, you can check the PDF.

For additional information about The Pari Center, you can check the PDF.

For Terms and Conditions, you can check the PDF.